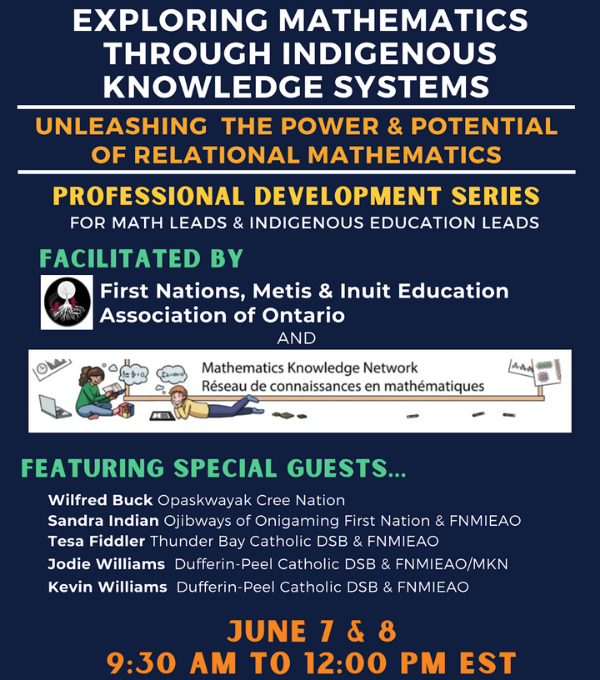 Throughout this 2-day PD we will explore how…

We will also showcase our newest resource Lessons From Beyond which include connections to the new grades 6 - 8 math curriculum as well as share our current work which will expand into the primary and secondary divisions.

Wilfred Buck is a member of the Opaskwayak Cree Nation, and is recently retired from working with the MFNERC as a Science Facilitator. He obtained his B.Ed. & Post Bacc. from the University of Manitoba. As an educator Wilfred has had the opportunity and good fortune to travel to South and Central America as well as Europe and met, shared and listened to Indigenous people from all over the world. He is a husband, father of four, son, uncle, brother, nephew, story-teller, mad scientist, teacher, singer, pipe-carrier, sweat lodge keeper, old person and sun dance leader. As a Science Facilitator with MFNERC, he was given the mandate to “put a First Nation perspective in the sciences”. The easiest way to go about doing this, he was told, was to look up. Researching Ininew star stories Wilfred found a host of information which had to be interpreted and analyzed to identify if the stories were referring to the stars. The journey began…

Sandra Indian - Giizhigokwe is an Anishinaabekwe from Onigaming First Nation.  She takes great pride in being an Anikikobijigan, a Nookomis and being the Matriarch for her family.  She is a storyteller and knowledge keeper.  She promotes wellness and the importance of being connected to the land.  Her background in the field of Education and Social Work Services.  Sandra currently works as an elementary teacher with Baibombeh Anishinaabe School.

Jodie Williams currently works as the Indigenous Education Coordinator for the Dufferin Peel Catholic District School Board.  As the Co-Chair for the First Nations, Métis and Inuit Education Association of Ontario, Jodie travels globally giving workshops and developing resources to support Indigenous Education in schools.  She is also the lead on a provincial Community of Practice for Indigenous Knowledge and Mathematics.

Kevin has over 20 years of experience in education specializing in Mathematics.  He has spent 10 years as a Math Consultant for the Dufferin-Peel Catholic DSB and is a Senior Tutor for TVO’s Mathify.  Kevin has written and reviewed for different mathematical resources including TVO Learn, Pearson, Rubicon and the FNMIEAO.  He has presented at many OAME conferences over the years.  Kevin is a proud father of 5 daughters and recently became a grandfather with the birth of, you guessed it, a granddaughter.

Questions can be directed to: info@fnmieao.com

MEMBERS CAN VIEW PAST EVENTS HERE: